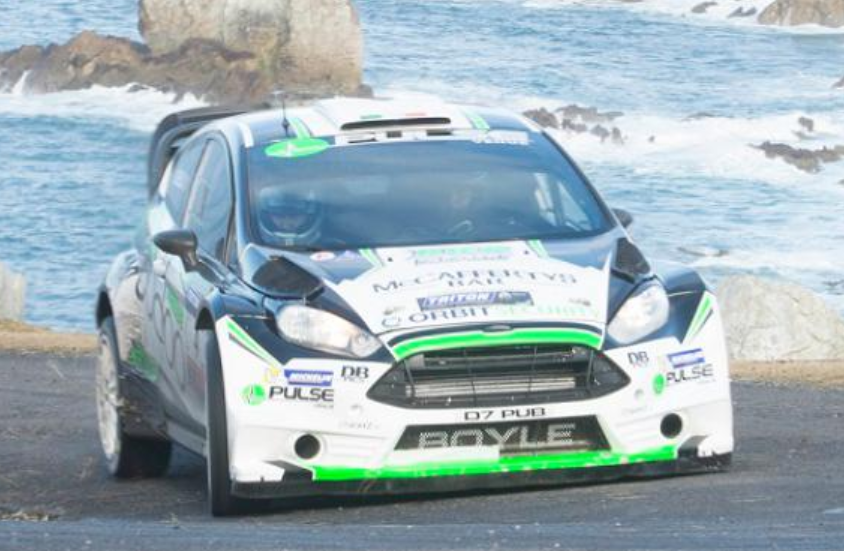 At the end of the nine-stage event on the scenic Achill Island, Boyle/O’Reilly finished 37 seconds ahead of the Monaghan/Limerick duo of Josh Moffett and Keith Moriarty.
On their debut in a Ford Fiesta R5, Derry’s Desi Henry and his Cork co-driver Liam Moynihan netted third – one minute and 1.1 seconds further behind.

Top seeds Donegal’s Joe McGonigle/Ciaran Geaney (Mini WRC) were fourth.  Former Triton champions Donagh Kelly (Ford Focus WRC) and Roy White (Ford Fiesta WRC) didn’t enjoy the best of fortune, Kelly punctured and dropped away down the order before finishing tenth in general classification while White was an opening stage casualty when he slid off and beached his car.

Boyle, who survived an electrical glitch en-route to the start, punched in the best time on the short opening stage where he was 2.3 seconds ahead of the Ford Focus WRC of Donagh Kelly with Josh Moffett (Fiesta WRC) 1.9 seconds further behind and 0.7 seconds ahead of fourth placed Desi Henry (Fiesta R5).

Former Triton champion Clonmel’s Roy White (Fiesta WRC) had an all too brief event, he slid off and beached his Fiesta at the stage end, under Rally 2 he went on to finish 57th. overall.

On the 15.14 kilometre Atlantic Drive stage Boyle set another fastest time just as he did on S.S. 3, The Valley.  The Donegal driver arrived at the Keel service park with a lead of 16.2 seconds.  “You won’t believe this but the car stopped on the way to the opening stage, it was an electrical issue that we sorted.  I’m playing with the suspension settings, they were a bit too soft earlier.”

Moffett was second, “I haven’t sat in this car since Monaghan two years ago but I’m getting the feel of it now.”

Third placed Henry – 16.3 seconds further behind was happy with his progress although he lost time on the second stage possibly due to the short gearing of his new Fiesta R5, he also had to slow to avoid contact with a sheep dog.

Kelly spun on the second stage and lost a place but a time consuming puncture on the third stage dropped him to 47th. place.

Top seed Joe McGonigle (Mini WRC) – 38.4 seconds off the lead slotted into fourth, he admitted that he was struggling with the set-up, he also had a slight altercation with a bale on the second stage.

On the repeat loop of three stages Boyle managed to extend his lead margin to 21 seconds, the Donegal driver admitted he pushed hard and enjoyed a clean run.  Second placed Moffett was of a similar view and was clearly enjoying the challenge.

Henry – 44.7 seconds further behind – was trying various settings and some suspension adjustments to find the ideal set-up for his new car.  A more confident McGonigle remained in fourth and as previously, Maguire and Group N leader Wray completed the top six.

Kelly made up several places and was 18th at the final service, he reckoned that he probably opted for a tyre compound that was a little too soft.

Although Armstrong continued to lead the Modified section, a charging Darcy reduced the deficit to 6.9 seconds.  Cumiskey, sandwiched between the duo reckoned that the suspension set-up was probably a little too soft.  Conlon was tenth.

Boyle was quickest through stages seven and eight to move 33.6 seconds ahead of Moffett, Kelly picked up two places on the short seventh stage but on the longest stage of the rally, Atlantic Drive he moved from sixteenth to tenth, his final finishing spot.
Boyle went on to record a fine victory, he also won the Power Stage to claim an extra Triton championship point.  Moffett and Henry completed the top three.In the Modified section, Stuart Darcy reeled in Cavan’s Chris Armstrong (Escort) on the final stage despite losing the exhaust of his Darrian on the penultimate stage and some gear oil on the final stage.

In the Triton Showers Junior category Armagh’s Jasson Black and his Monaghan co-driver Jack McKenna took an emphatic victory, they finished two minutes and 58.1 seconds ahead of the Citroen C2R2 of Armagh’s Johny Armstrong/Philly Mitchell.  The Donegal crew of David Kelly/Kenny Bustard (Toyota Starlet) were 42 seconds further behind in third.  Black/McKenna also won the Triton Showers “Drive of the Day” award.