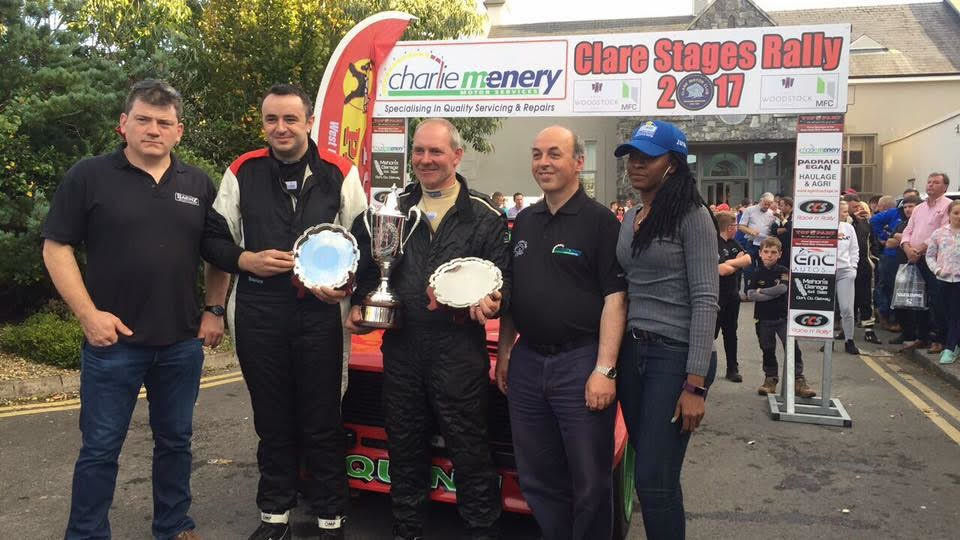 Kerry Motor Club crews enjoyed superb results at last weekends Clare Stages Rally. Ballyduff native Kevin Barrett and co driver Sean Mullally steered their Subaru WRC to an excellent 3rd overall. Clare Motor Club had announced that they would be awarding the top overall modified 2wd crew in this year’s Clare Stages Rally 2017 with the prestigious Colin McRae “If in Doubt, Flat Out” Perpetual Memorial Cup.
This was made possible with the kind permission of the McRae family. I’m sure everyone will agree this is a highly sought after award and there was a mighty battle on the Clare tarmac for modified crews to get their names on the trophy.
The honours at the end of the day went to Kerry Motor Club members Mike Quinn & Tony Healy.
There was more good news for Kerry Motor Club members with Tim Enright & Galway co driver Darina Joyce taking over the lead of The Top Part West Coast Rally Championship after Six Rounds. They move 9 points ahead of Roy White and Shane Maguire who tie on 80 points with just one Round to go in the Kerry Mini Stages rally in November 12th.

Well done Gerry O’Brien and all in Clare Motor Club for running a super event.